For a lot of people Pro Wrestling is fake… It is seen as something that children and young adults watch, and people who are older that watch it are looked down upon as well. Well, it is fake, but so is every other TV show on television that has a story line. No one is disputing that, no fan of Wrestling argues in the opposition of that statement, yet so many people do not understand why people my age still continue to watch it. I am sure many of us have many different reasons for watching this scripted sport.

For myself Wrestling was real when I was younger. There was always the Hero (Face) taking on the Villains (Heels) and when it looked like the Hero was going to lose, he made a miraculous comeback and defeated the Villain. This was important for me growing up with a father that wasn’t around very often. These Heroes helped me overcome many things growing up that I didn’t have anyone to talk to about or listen to me. Every time Hulk Hogan or the Ultimate Warrior came back from the brink of defeat to recover and win against their opponent I knew that everything was going to be ok. With not having a male role model around these figures helped me understand the virtues that it takes to be a good person. No matter what they were like in real life, the only thing the children like myself saw was the heroes.

As I grew up and there were father figures in my life, wrestling was still steadfast. If I didn’t get along with someone the heroes I looked up to were there to comfort me, and show me that any evil can be defeated. Years went by and my home life got much better and I stopped needing them in my life, I slowed down on watching wrestling. School took over, girls took over, work took over, and growing up took over. No matter what was going on in my life however stressful or hectic, I could always turn on the WWF or WCW and watch my heroes vanquish their obstacles, and I knew that I could too.

Wrestlers such as Mr. Perfect, Bret “The Hitman” Hart, The Legion of Doom Hawk and Animal, Hulk Hogan, The Ultimate Warrior, The Honky Tonk Man, Koko B. Ware, Sargent Slaughter, and so many more were such a huge part of my childhood I can never in my life repay those characters for what they mean to me. I still watch wrestling and as I don’t see as many people that have the Hero attribute as so many characters did back 20+ years ago. There are still characters kids can look up to and I hope that they mean as much to kids now as my heroes did to me.

So Nerdy It Hurts 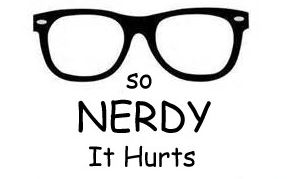