Agents of SHIELD 0202: Heavy is the Head

Well after a great season 2 premiere but abysmal ratings (undoubtedly because of the fiasco of last year) the second episode of season 2 Heavy is the Head was just as good as episode 1. We see a death of a team member, a car chase, a dramatic scene between Skye and someone from her past, Coulson struggling with his demons within, and Fitz adjusting to life without Simmons. That may seem like a lot going on for this show, but like I said last week the current show writers and runners have it covered.

One of Coulson’s team is captured by General Talbot and Coulson pulls a Jax Teller-like plan to get Talbot to see him for what he is, a friendly. But Talbot wants nothing about it. We are even seeing Adrian Pasdar bringing in a great character, even though we watched him bomb on Heroes a few years back. Agent Skye and Agent May bond while Fitz’s new buddy is big time fan favorite all over the internet. This episode is chalked full of everything last season lacked, and so far this season is 2 for 2 in episodes better than all of last year. Alas, it is going to take a lot for the viewing public to forgive season 1, but they need to. It is not even the same show anymore.

Absorbing Man is back in this episode and more characters are mentioned throughout, with this kind of talent and with the list of stars at Marvel’s disposal, Agents of SHIELD is poised to spring back strong and take the Super Hero show genre by storm. But they need the commitment from fans that may have already abandoned ship too soon. This episode gets a 3.5/5 from me with a Must Watch label.

The Agents of SHIELD that we had such high hopes for has finally arrived. Even though season 2 has seen the lowest ratings ever, I don’t think it even matters because if they get cancelled they’ll will surely move on over to the Netflix. The show is now about Coulson as Director of the broken SHIELD while being hunted down by General Talbot (Pasdar) and fighting to recruit assets against the also rebuilding Hydra. Episode 1 titled Shadows sees both Hydra and SHIELD vying for a specific artifact.

We see a few Marvel characters show up in this season premiere including a very well done Absorbing Man. Probably the best villain that they have done so far, Crusher Creel (Absorbing Man) is seen trying to steal an artifact that SHIELD also wants, and it is quickly made know that he is taking orders from Hydra. On top of this the US Army is always on the teams tail making it difficult to get things done as a rebuilding security team.

There has been much better dialogue and writing in this 1 episode and you can really tell that this show has done a complete 180 and is now headed in the right direction. It is refreshing because of the bashing that the show took from people that were comparing it to other Super Hero shows on TV even though this isn’t a super hero show, it is just based in a super hero universe that sometimes features super powered people. Overall for a season premiere it was top notch; that along with great writing and a superb introduction to a main Marvel villain I will give this episode a 4/5. It is a must watch.

Have you ever wondered what it would be like to have super powers? Yep me too, but what would it be like if the people in our every day lives had super powers too? What if it were so mundane and ordinary that everyone on Earth had a power and they had to go on living their everyday lives like it were no big deal? What current comic book superheroes would be best suited for normal blue collar jobs? That is the question at hand and each Monday I will bring you a different job that people hold everyday and I will suggest a few different Superheroes and/ or Villains that would be best suited for those jobs. I hope you enjoy, because this weeks job is:

Imagine walking into 4th period Chemistry your 10th grade year and seeing Mr. Strange up there at the front of the class. Today you are pretty sure your assumptions are correct. He knows real magic and he is going to show you! He can do any experiment and mix any combination of compounds to wow the class and make sure everyone is learning to their full potential.

He would look a little silly around a high school class room in a cape, and he keeps making the I love You from ASL. But other than that he totally has the personality of a High School teacher and definitely has the look for it. I personally would have loved for Mr. Strange to be my Chemistry teacher. I think it would have been tons of fun!

That’s right we’re back from the hiatus and we’re bringing you an all new Top 5 list and this time its gonna Slam some thoughts! Think back to your childhood or even currently for some of us. What are your ALL TIME favorite Pro Wrestling moments? Could be any from the WWE, TNA, NWO, WCW, ECW, and any other Pro League.

According to one of his tweets it seems that way!

Today was an interesting DEADPOOL day for me already before I ever heard about THIS… http://t.co/D7V6SFakxr

Well by now you have heard the news, on February 12th 2016 we will finally be getting a Deadpool Movie! That’s right in case you were under a rock, we are finally getting a movie about the Merc-with-a-Mouth! This is very exciting news. It has been a long time coming, longer for some of us than others, but it has finally happened. Now with the “Leak” of the official footage and the Ryan Reynolds interview about the footage it seems like this was just a slow release to gauge the internet’s excitement for a Deadpool movie. With an overwhelming positive reception it seems like Fox got the affirmation it was looking for and they pulled the trigger and made the announcement today.

Now we have already had a Deadpool in an X-Men Movie but not many fans liked it. That was a poor way to put it… The internet revolted. I didn’t hate it, in fact Ryan Reynolds take on Wade Wilson was very impressive and even his stunts as the “Deadpool” at the end of the movie was great. It just wasn’t the Deadpool I was hoping for, but hey it was a Deadpool. This “Barakapool” as it was named was a Weapon X blunder that was a farce on the screen, but it was redeemed at the very end of the movie when Ryan Reynolds head appeared after being decapitated and said shh, breaking the 4th wall which is a Deadpool staple.

The time to rejoice about this is now, because as we all know the time to bitch and moan about this is on the horizon. Deadpool is a delicate subject, because his character has spanned 3 different decades and many different fans have their own visions on how they want their Deadpool to be. Some want him to constantly break the 4th wall, some want nothing but gore, others slap stick comedy, and some even debate how his voice should sound. There is Fabian Nicieza’s version of Deadpool that is much less pop culture based and more of a fast talking say the first thing to come to his mind type of crazy. Joe Kelly’s version of Deadpool was much more quick witted and pop culture based, while Gale Simone and Daniel Way used edgier type of comedy in their portrayal of Deadpool. I think one thing is certain for this movie, as long as he got cancer and acquired his healing factor from the Weapon X program in exchange for his services it will satisfy the masses. 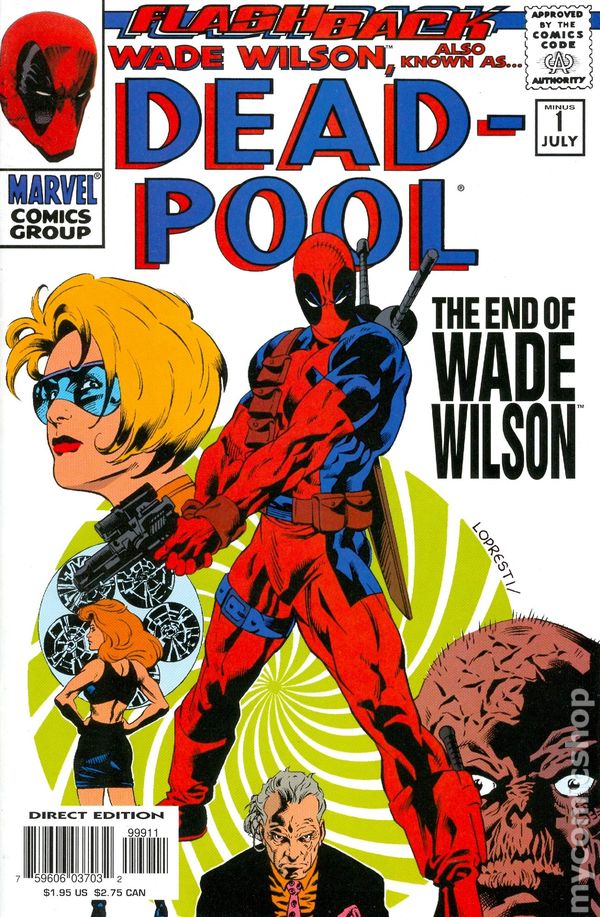 The Merc-With-A-Movie hits the Silver Screen February 12, 2016 just in time for Valentine’s Dates across the country. That is pretty strategic on Fox’s part, I mean there will be a lot of red in the movie and obviously that is romantic right?

Thanks to Deadpool Bugle and the Hollywood Reporter for the story.

So Nerdy It Hurts